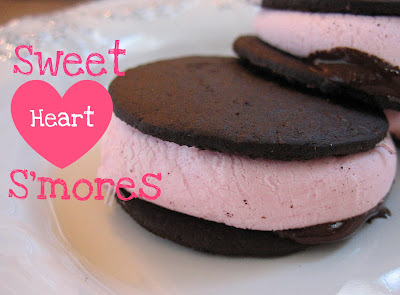 I'm neck-deep in pink this week as I prepare to co-host a Pretty in Pink baby shower. These easy treats would be good any time but they would be especially lovely for Valentine's Day.
Sweetheart S'mores 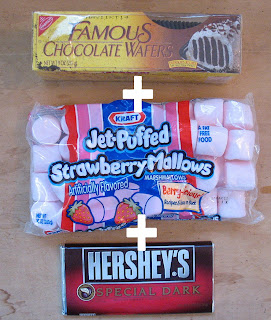 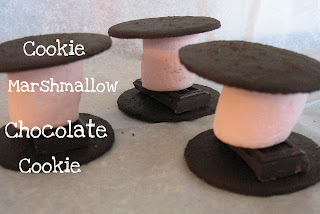 On a parchment-lined cookie sheet layer:
Place cookie sheet in a 300 degree oven for 5-8 minutes (bottom rack). The chocolate will melt and the marshmallow might slide off but don't panic. Re-stack and press the top cookie down to slightly flatten the marshmallow.

Serve warm or let them cool to room temperature. They are really chocolaty, delicious and pink! 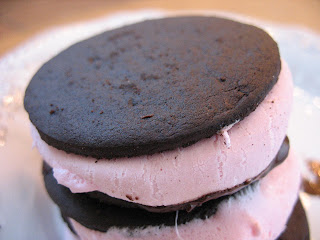 Thanks for stopping by We Grow By Our Dreams Today. I will have lots more pink goodness to share with you in the next week. :)
Posted by Heather Grow at 6:27 PM 2 comments:

I watched the movie Julie and Julia tonight. It really made me think about when I first started this blog and how it has transformed me. (The movie is great by the way.)
My first blog post was on July 13, 2007. My blog was basically a card blog at its inception.
When I began blogging I thought that I was just an "okay" cardmaker. I enjoyed the craft but felt very outdone by all of the talented cardmakers in the blogworld (and real world.) I used my blog as a means to encourage myself to try new things and create more.
On July 31, 2007 I posted my first tutorial. I made a shortcut and shared my instructions for creating a scalloped edge using dot stickers.
One of my most popular tutorials so far has been my Krispie Pop tutorial. I make a million versions of these but I chose to do the tutorial on the jack-o-lantern pop. The original post was on October 22, 2007.
Right around this time I submitted cards to the justjohanna (now Odd Bird Planet) Design Team call. To my surprise, I got accepted. I was on the Design Team for a year and it really pushed me to perfect my craft. Also during that year I sent cards in for magazine calls. I was published three times including on the cover. It was amazing to me at the time because just months earlier I was feeling "blog unworthy."
My most read tutorial is my Origami Christmas Tree. Actually, I have a few versions of origami trees but the one that is looked at month after month was posted on November 14, 2007.
On December 19, 2007 I offered my first blog candy. I randomly drew a winner and it was a woman who lived on the other side of the world from me. Luckily the prize didn't weigh very much or I would have been really sad.
Which brings me to another fun statistic. Do you use Google Analytics?
Not surprisingly, most of my blog readers are in America. This makes sense since I write in English and most of my friends live in America. The next most common are somewhat surprising to me. The second most popular: Turkey
Third most popular: South Korea
So, hello, Merhaba and Ahn-Nyeong Hah-Seh-Yo to my faithful readers.
December 24, 2008 was my first blog open house. I joined several other bloggers in a fun little blog hop. I was hooked! Since then I've shared my home decorated for Super Bowl Sunday, Valentine's Day, Easter, 4th of July, Halloween, and Thanksgiving. 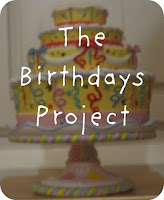 One of the highlights of my blog life was my Birthdays Project. Last year for my birthday I asked fellow bloggers help me collect baby items to be sent to needy moms around the world through LDS Humanitarian Services. To my delight, I received donations from around the US and Canada. I hand-delivered the items to the LDS Humanitarian Services. Through your generosity we were able to bless 11 babies and their mothers with clothing, blankets, and hygiene items.
I'm working on another project for my birthday. I'll keep you posted. ;)
Well, thanks for sharing a blog flashback with me. I have a few things planned for the blog for the blog this year. I hope that you will join me on my journey. And, please, leave a comment sometimes. :)
Posted by Heather Grow at 12:40 PM 1 comment: 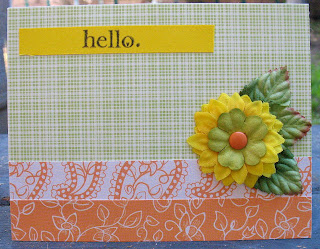 I had an unexpected day off from work yesterday. Yeah for free time. Boo for no notice and a missed opportunity to visit the bf in Salt Lake City.

Operation Write Home has a challenge right now to send in any amount of cards but half of them need to be spring themes (Easter, Mother's Day, etc.) and the other half need to be general themes (thinking of you, love you, happy birthday, etc.)
Have a great day. Try to do something creative.
Posted by Heather Grow at 12:20 PM 4 comments:

Last March I fell head over heals in love with the cover of Country Living Magazine. I knew right then and there that I wanted to recreate the look in my living room. 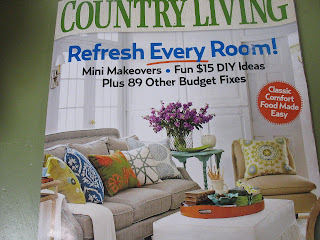 I already have a neutral color couch and chair so I just needed to find some really great pillows. I don't know if you've been pillow shopping lately but nice pillows can be pretty pricey, especially if you are buying 6 at a time. Luckilly, I discovered my new favorite store- Home Goods. OMG, I love this place! Everything is really nice quality and the prices are very reasonable. I bought 4 of the 6 pillows there.
Here's how I did: 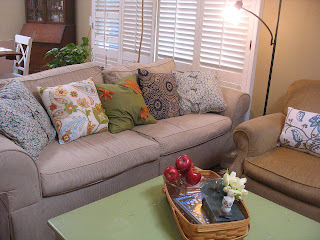 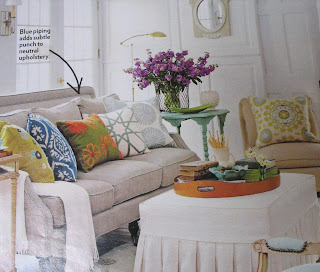 Not an exact match (the magazine house doesn't have the cool apple green coffee table) but I think it looks pretty good. The only pillow that I really couldn't find in the store was the green pillow with orange details so I whipped up my own version. 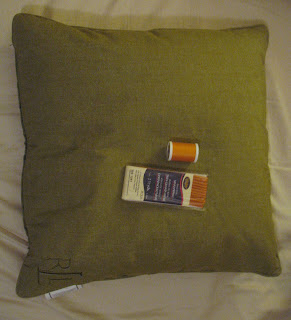 I added some funky orange flowers to a green pillow using orange piping and thread. It took me over an hour but it came out pretty cool.
All of the Home Goods pillows are down-filled so they are super comfy. Here are some more pics: 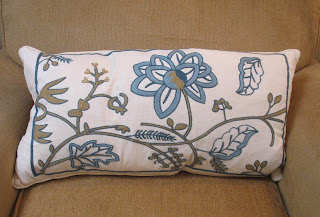 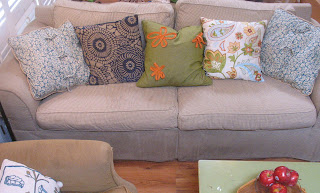 I like it. My old pillows got a new home. Thank you for stopping by my blog today.
Have you ever been inspired to recreate something in your home like a picture in  a magazine? How did it turn out?
Posted by Heather Grow at 9:04 PM 1 comment:

This is Month 1 of We Grow By Our Dream's 12 Months of Giving. Every month WGBOD will feature a fun and easy way to make a difference in our community.
Month 1: Giving to Animal Shelters
There are so many ways that we can help animals in need. You can contact your local shelter to find out their specific needs but below is a list of many things that will be appreciated by most animal shelters.
1. Pet items. This includes leashes, toys, pet beds, flea treatments, pet bowls, and unopened pet food. You may have extra pet items in your home or you may stumble across a great deal out there.
2. Your time. The shelters are always looking for volunteers to help walk dogs, pass out information, and help at fundraisers and adoption drives.  This is a great project for big kids too.
3. Used linens. Animals love having a warm, dry place to sleep. Shelters need towels, blankets, pillows, placemats (the vinyl ones are great for cats), tablecloths, flannel sheets, etc.
4. Cleaning Supplies. It takes a lot of supplies to keep the shelters clean and healthy. Shelters need laundry detergent as well as bleach, windex, Simple Green, etc.

5. Kitty Litter and newspapers. You can only imagine how much the shelters use.

6. Money. This seems obvious but with local government funding down, the shelters are really struggling to provide for the animals. Usually these donations are tax-deductible and sometimes employers can match your donations. Get the kids involved and have a garage sale or lemonade stand to raise some money for your shelter.

This list is just a sample of items needed by animal shelters. Again, it is best to contact your community shelter to find out its needs.

Moses says thank you for helping his friends. :P
Posted by Heather Grow at 10:26 AM 1 comment:

Heather Grow
Orange County, California, United States
I'm Heather, the author of The Vintage Sheet Blog. I love to make things, bake things, and decorate my home for holidays. When I'm not getting my craft on, I'm at the beach.

All content (including text, photographs, and design work) is © Heather Grow. My original artwork is for personal inspiration only and may not be copied for publication or contest submission.